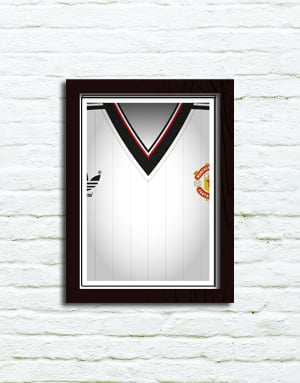 As worn by Bryan Robson, Remi Moses and the young up and coming Norman Whiteside, Mark Hughes, and Paul McGrath. The highlights wearing this kit were the FA Cup Semi Final victory over Arsenal. United coming back from a goal down to win 2-1. Robson with the first and Norman Whiteside with the winner. The game was also remembered for Kevin Moran being stretchered off with a head injury, raising his fist in victory as he was carried off. It was also worn in the 1983 Charity Shield 2-0 victory over Liverpool at Wembley. Robson's two goals giving the reds the win and the belief that it could be their season.