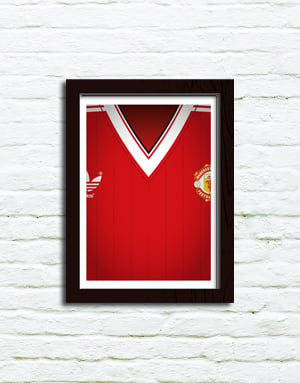 As worn by Bryan Robson, Remi Moses and the young up and coming Norman Whiteside, Mark Hughes, and Paul McGrath. Despite challenging for the title in this kit, United fell away in both seasons finishing 3rd and 4th. The highlight for the jersey was the 1983 FA Cup Final, which United won a replay 4-0 against Brighton after the initial game finished 2-2. In 1984, this top was worn against a Barcelona team containing Diego Maradona. Two nil down from the first leg, a Robson inspired performance overturned the two goal deficit with Frank Stapleton scoring a third to complete the 3-0 win and send United into the Semi Final of the European Cup Winners Cup. A night that is still remembered as fondly today as it was back then.